Little Dude received a second hand play kitchen when he was nearly 18 months old and it was an instant favorite. From the first day he owned it he was happy playing with the dishes, learning to put salt and pepper on food everything and exploring in his very own kitchen space.

When we bought our new home I knew right away that he was going to need an upgraded version. And I could absolutely justify the expense since he loves playing with it so much. I looked at it as though he will likely play with it until he is 4-5 years old (maybe older?) which means it could be in my dining room/living room for the next 2-3 years at a minimum. I quickly decided that a new upgraded kitchen would be Little Dude’s big Christmas gift. 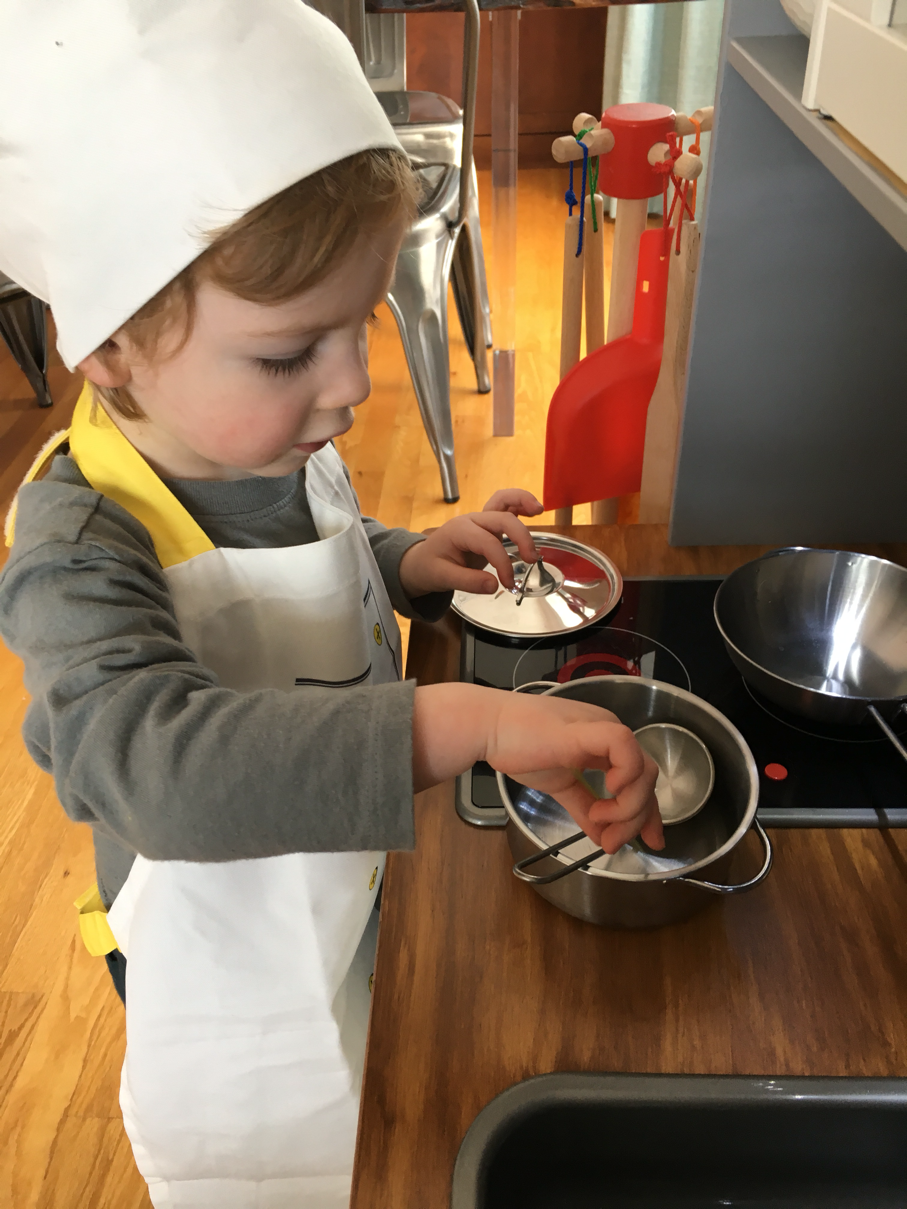 I looked at several options before deciding on the IKEA DUKTIG Play Kitchen, I even did a poll on Instagram of my two finalists. The voting was neck in neck until someone commented suggesting that I modify the IKEA DUKTIG play kitchen to match our house. Brilliant!

I need your help! I was set on buying option 2 for Little Dude’s big #christmas gift, but now I’ve come across option 1 and am not sure which to choose. Which one do you like?! It will be set up next to my dining room (see previous post) for a while… . . #help #choices #littledude #playkitchen #kidkraftkitchen #ikeakitchen #letthembelittle #christmasshopping #theresashoeforthat #inmyshoes #momlife
A post shared by Jenna MacDonald (@jennamac007) on Oct 31, 2017 at 6:28pm PDT

Like any crazy mom trying to make their son a perfect play kitchen that would match the rest of the house (there are more of you out there, right?!) I took to pinterest for ideas and to decide on exactly how I would modify the IKEA DUKTIG play kitchen. 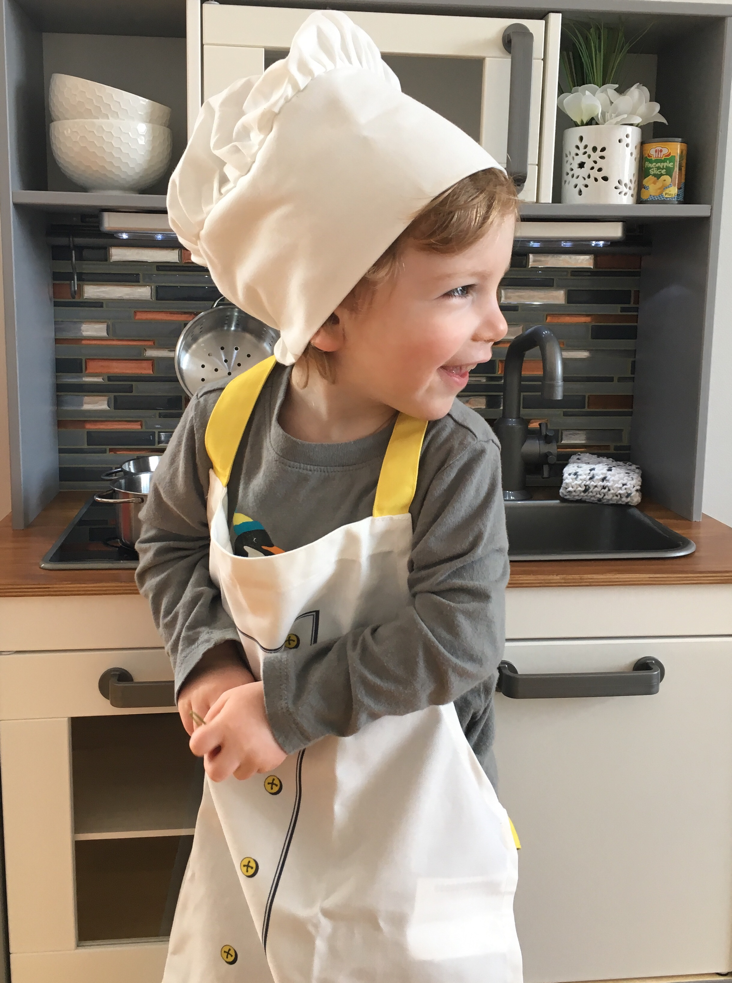 I decided to stain the counter top with the goal of matching our dining room table (as best as possible), painting the rest of the wood on the kitchen grey and creating a back splash to add on as a finishing touch. 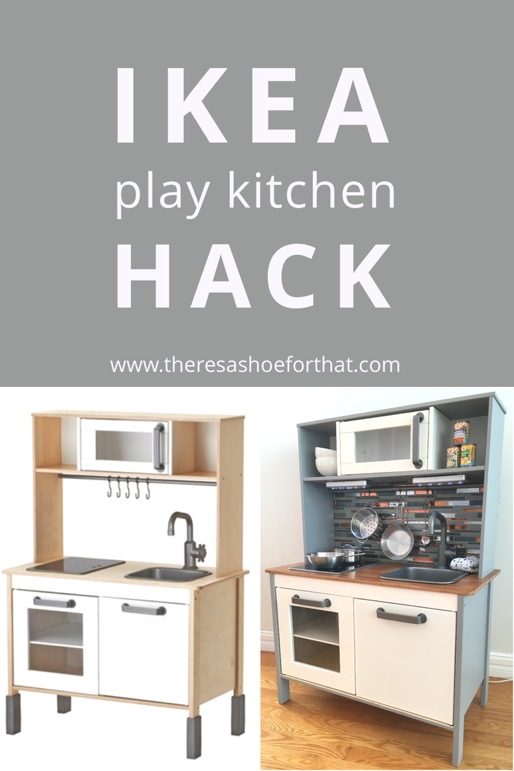 The process was pretty simple for the hack. But I will break it down into 5 steps to make it even easier to follow:

STEP 1 – Sorting Pieces & Painting I unpacked all of the pieces of the kitchen, laid them out on an old table cloth that I now use as a painting cloth and determined what would be painted grey (everything that was wood color except the counter top) and then put all of the white pieces, hardware and accessories aside. 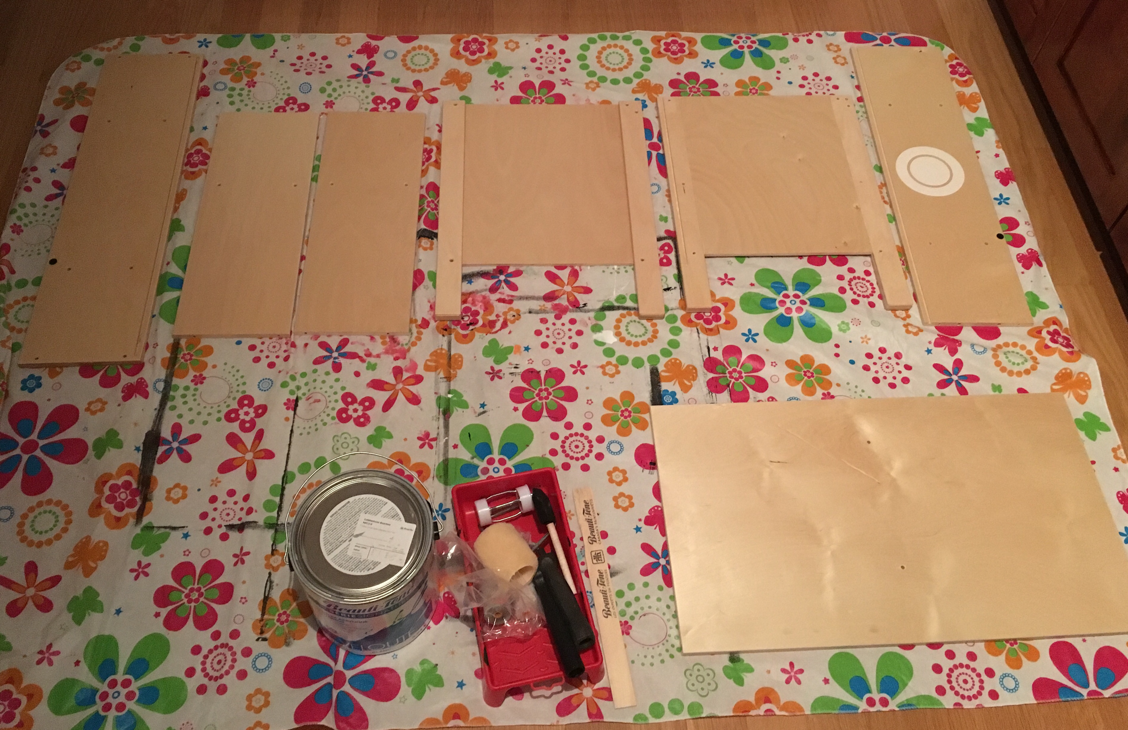 I then did a test on the bottom of the kitchen base in order to make sure the paint would stick without me sanding all the pieces and that the stain would go on OK. 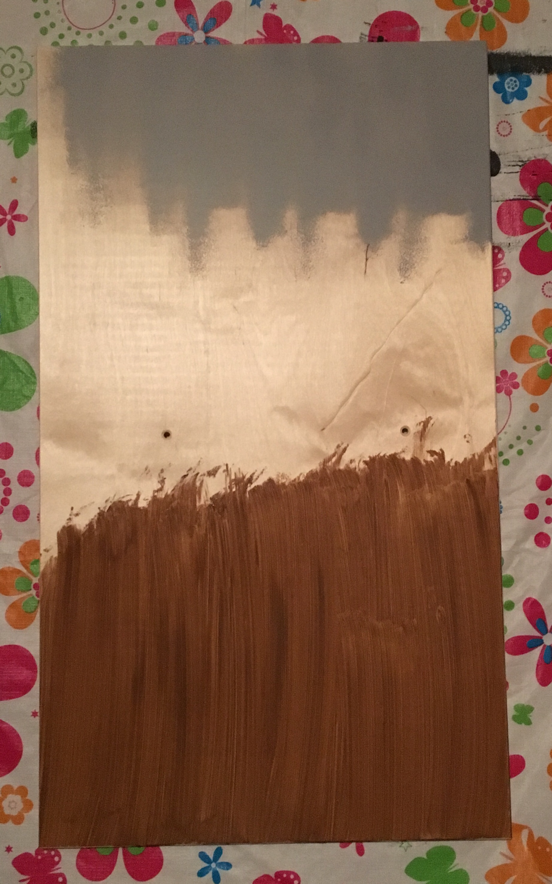 After two coats of paint I decided it wasn’t going to be worth the effort to sand everything (or the mess in my basement) and pained all of the pieces as is. Any good DIYer will tell you to sand the pieces, but for once I decided to live on the edge and skipped the sanding ;).

And off I went… painted everything, waited an hour and a half and then painted everything again. I did on side so the pieces could lay flat to dry and repeated this process the next evening (really, it was midnight…). 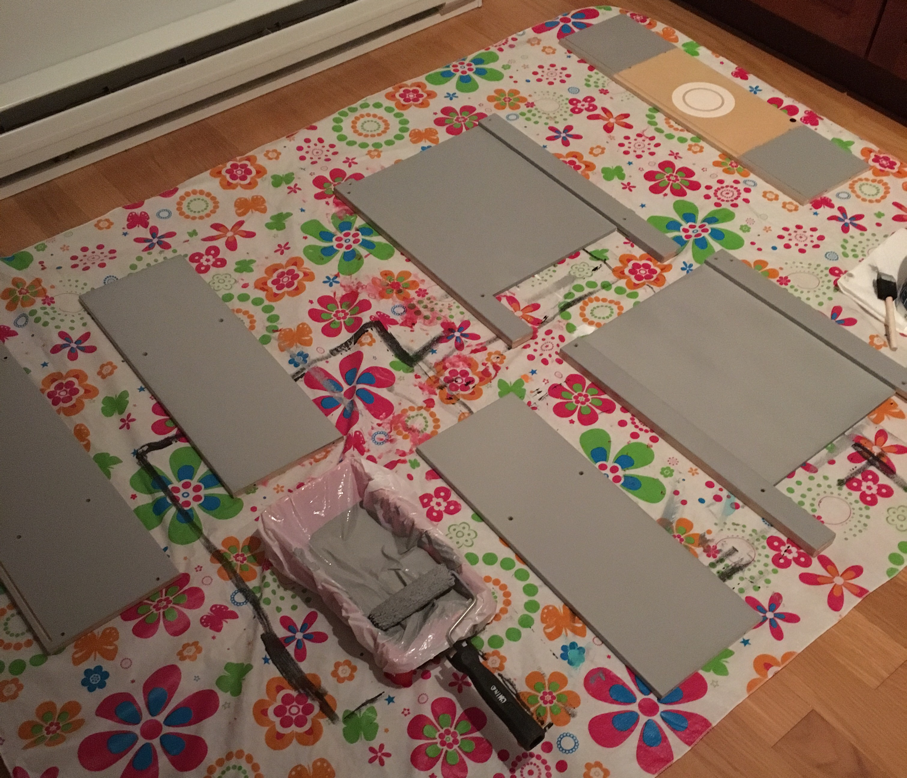 STEP 2 – Staining the Counter Top The key to doing this well is to use a white rag or cloth to wipe away the excess as you go so it doesn’t look like you’ve “painted” on the stain. Especially since I skipped the sanding it was extra important to use the stain cloth and a rag. In the end it cam out exactly as I had hoped; I was pleased with myself since it was my first time using the stain cloths and I hadn’t sanded the wood prior to staining as recommended.

STEP 3 – Assembly of the Play Kitchen Like all IKEA furniture this piece required following the directions and going through a step by step assembly process. It was truly not that bad though… it took the Mr and I about an hour (maybe a little more) to get everything together. STEP 4 – Preparing the Back Splash Let me first start by saying the back splash was the most expensive add on to the kitchen, but in my opinion it was also the add on that made the biggest difference! I cut a piece of foam board the width of the kitchen and made a line to where the backsplash would need to go. Then, while putting on the adhesive tiles I made sure to go above the line I drew to ensure there would be no gaps. I figured it was better to have more tiles on the foam board than not enough. 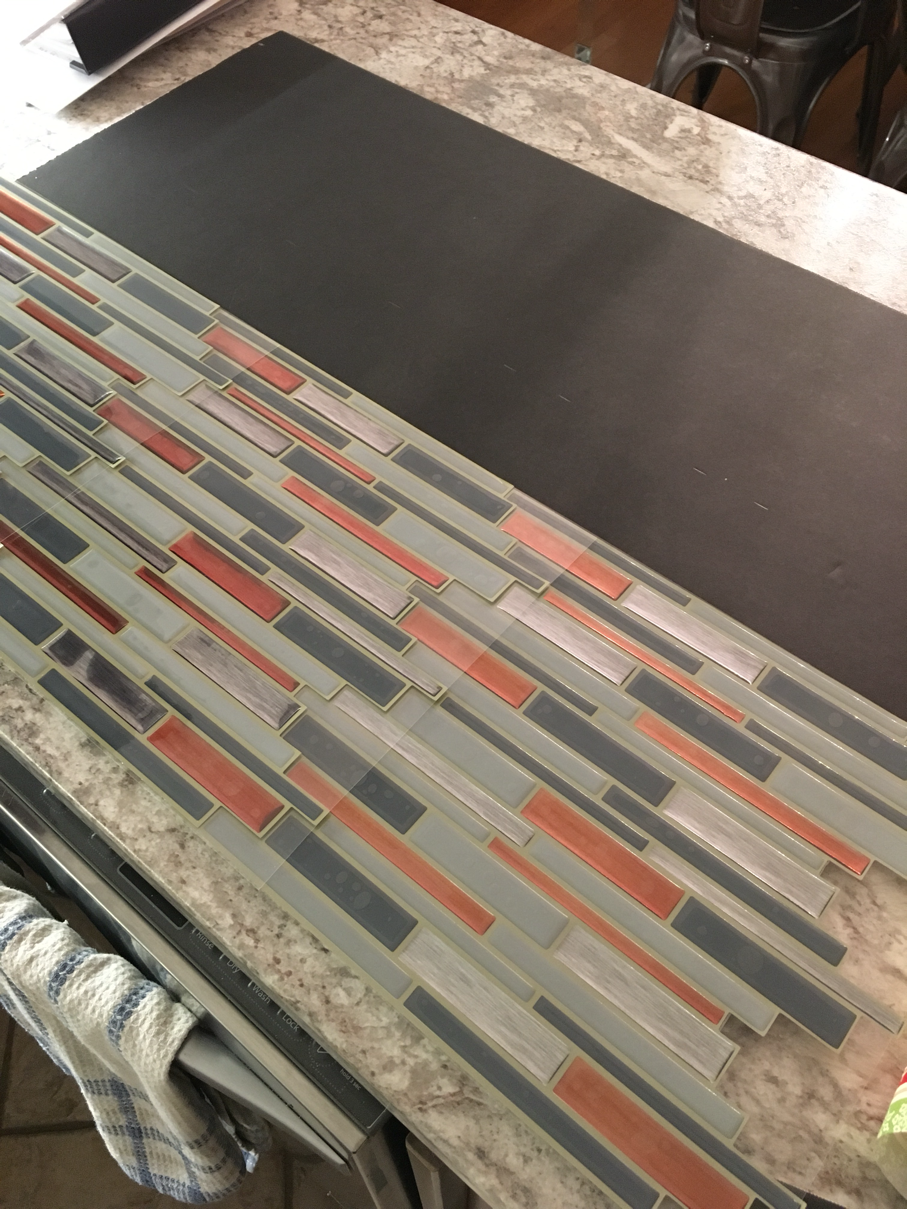 Due to the size and in order to avoid a crazy amount of cutting/measuring I used 6 self-adhesive wall tiles and they were $3/tile when I purchased them. For this part, I would strongly suggest shopping around or finding tiles you love since they become a focal point of the whole piece.

STEP 5 – Installing the Back Splash & Final Touches We installed the back splash by making a few final trims to make sure it didn’t stick out from behind the kitchen, holding it in place and used finishing nails to secure it in place.

Since Little Dude has been playing with the kitchen I am happy we used finishing nails as he does hit into the back splash while he is “cooking” and taking his pots and pans down from the storage rack. Had we used glue I am pretty confident the back splash would be on the floor by now. 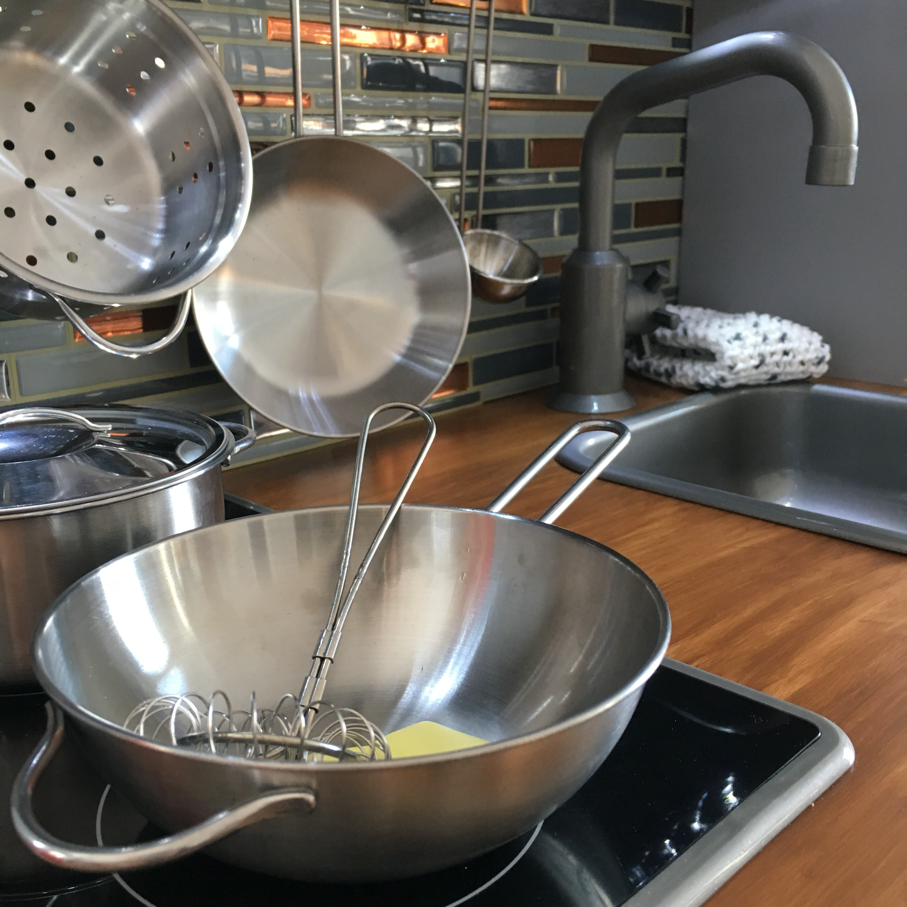 Last, but certainly not least we added two LED battery powered lights I found at Dollarama. They were a small addition but made quite a difference, especially in the evening time when we don’t have all the lights on in the house. 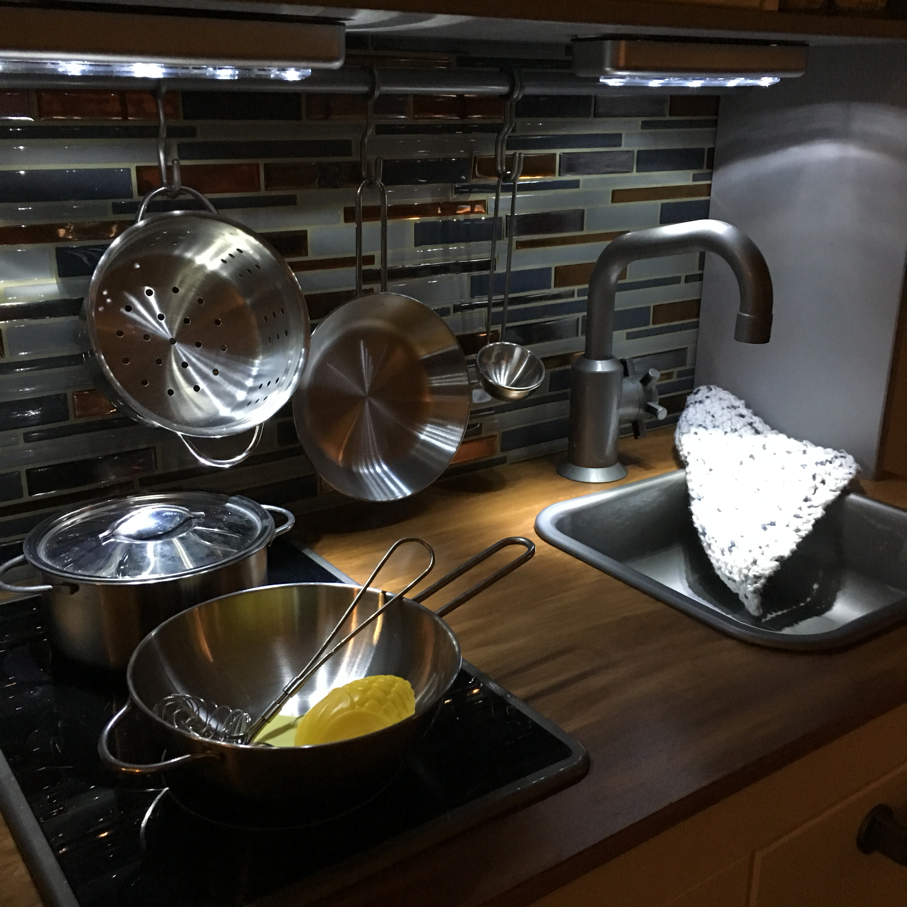 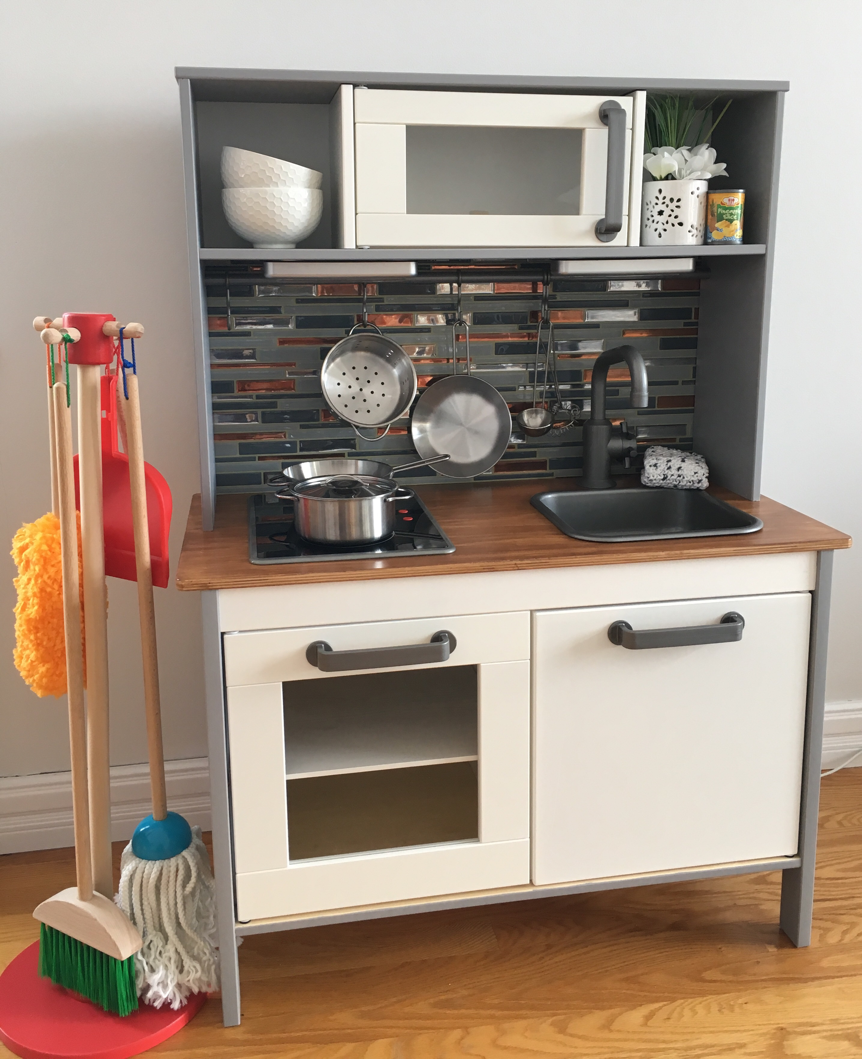 The problem with new sinks

Back to top
84 shares